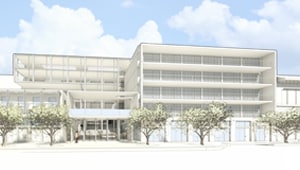 A rendering of Two Saints


The growing demand for downtown living in cities across the U.S., combined with the high cost of living alone, is leading to the spread of “co-living” developments far beyond global hot spots like New York and San Francisco. In New Orleans, a local firm is hoping to build a six-story, 233-suite co-living development in the Warehouse District, according to the New Orleans Times-Picayune.

Wisznia Architecture and Development said that tenants of the $35 million “Two Saints” apartment project would have their own bedrooms and bathrooms but share living areas and kitchens. Company founder Marcel Wisznia said his goal for the project is to create affordable living spaces for service industry, hotel and restaurant workers who want to be in the downtown but can’t afford the luxury rental market there.

“Those workers are really being displaced and pushed further and further out of the center of our town and having to commute further and further to go to work,” Wisznia told the paper, adding that the “culinary lofts” concept was modeled after local artists’ lofts. In most cases, four rooms would share one common area.

, which has properties in Crown Heights, Boerum Hill and Williamsburg, among other places, will manage Two Saints. Though the pitch is affordability, apartments will hardly be bare-bones: Suites will be fully furnished and rents are slated to include kitchenware, a weekly cleaning service and Wi-Fi. The firm will need city approval for the project, as current zoning only allows for a five-story structure.

A Minneapolis-based developer has filed an application to build a mixed-use complex with 640 to 830 apartments across the river from downtown St. Paul, according to the Minneapolis/St. Paul Business Journal.

Hunt Associates is planning to build the five-building complex, called Fillmore West, on a vacant, 13.4-acre formerly industrial lot — part of a 40-acre brownfield site that the city plans to redevelop into a “vibrant mixed-use community” through its West Side Flats Master Plan.

Fillmore West will border the West Side Flats Greenway, a public walkway set alongside a rainwater-fed creek running to the Mississippi River, according to the Pioneer Press.

The project will be delivered in phases, the first of which would involve a 120- to 150-unit apartment building with 127 parking stalls. The second phase is set to include 170 to 190 residential units and 175 parking spots. The commercial portion of the project, which would span 30,000 to 80,000 square feet,  would be delivered in the third and fourth phases. The buildings in Fillmore West will be four to five stories high, and if there is further demand for residential, there is a potential for a sixth floor, Hunt stated in its plans.

The city’s planning department told the Pioneer Press that construction is expected to start this year. 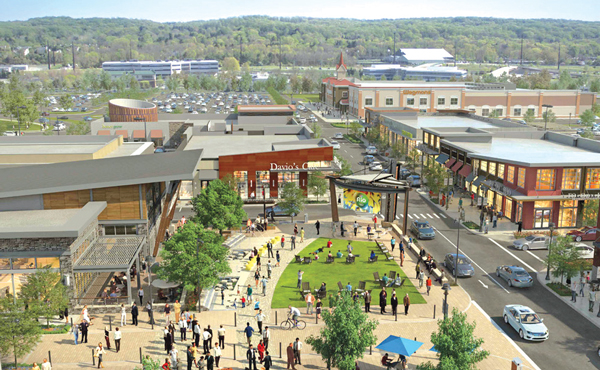 While sales have slumped at indoor malls, investors have been gung-ho on “lifestyle centers” like King of Prussia Town Center, which are anchored by health clubs and restaurants.

The Town Center, which opened last August, is 87 percent leased, mostly by fitness-oriented retail stores like REI, health clubs like L.A. Fitness gym and 11 restaurants, including two high-end steakhouses and two barbecue joints. The center is part of the 122-acre mixed-use Village at Valley Forge development, which is slated to have almost 3,000 residential units upon completion, ensuring a steady stream of customers. As part of the “lifestyle center” business model, which is aimed at getting people to stick around, the grounds feature ample seating and fire pits. It will also play host to a number of events during the year — this summer includes a seven-week yoga class series, outdoor movies, theater performances and an outdoor concert.

The CBRE-sponsored fund that purchased the shopping center already owns a nearby Wegmans supermarket, according to the Inquirer.

Aging Arlington Office Tower to Be Redeveloped into Condos, Retail

A midcentury office building in downtown Arlington, Virginia, may soon be replaced by a mixed-use tower twice the size of the current structure, the Washington Business Journal reported.

The owner, a subsidiary of the Weissberg Investment Corporation, filed a preliminary plan to replace the building at 1901 North Moore Street in the Rosslyn neighborhood with a 24-story tower that would have 407 apartments and condos situated above 12,709 square feet of retail space. The new building will replace a 12-story, 144,606-square-foot concrete office tower built in 1970 that locals often refer to as the RCA Building because of the now-defunct electronics company’s logo on the facade. Though Rosslyn’s office market has been sluggish of late, with the vacancy rate in the area sitting around 22 percent, according to the business publication, the residential market remains strong. The project’s D.C.-based architects, Hickok Cole, designed a slim building to avoid obstructing area views. If approved, it would be the latest in a series of Rosslyn redevelopment projects that followed a comprehensive renewal plan adopted by Arlington officials in 2015. The Rosslyn Sector Plan is meant “to advance Rosslyn’s transformation into a truly great urban place” — one friendlier to pedestrians and families. The new tower’s site is about a block from the Rosslyn Metro station and a short walk to the Potomac Heritage Trail, Theodore Roosevelt Island and other parks.