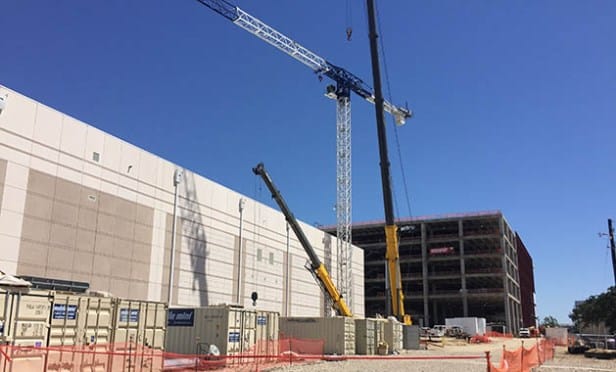 DALLAS—Two significant milestones were recently celebrated at the Southwest Airlines Wings project: topping out of what will be Southwest’s new office/Leadership Education and Aircrew Development (LEAD) Center and the on-time delivery of the first flight simulator. McCarthy Building Companies Inc. broke ground on the new building at the corporate campus in May 2016 and one year later, completed the portion of the Wings building that will house the LEAD Center in time to receive the first Flight Simulator. The overall project is expected to be completed during the first quarter of 2018.

“We are committed to delivering on our promise to complete the project on or ahead of schedule and within budget for Southwest Airlines,” said Dan Cummings, McCarthy project executive. “Our team has worked diligently in getting this building ready for the pilots and technicians. We have had the full support of Southwest Airlines, the project architects and engineers, and our subcontractors, to maintain the flow of work necessary to accomplish our mission.”

The first flight simulator installation in the LEAD Center was completed in mid-May. The building has capacity for 18 simulators with most of the positions scheduled to receive equipment in the coming months. These flight simulators will train pilots on existing and new aircraft being added to the Southwest fleet. The LEAD Center, which is built with a hardened structure designed to withstand the forces of an F4 tornado, is scheduled to start operation in the third quarter of this year.

“The project is ‘mission critical’ to Southwest Airlines,” Cummings tells GlobeSt.com. “The new facility and training equipment will be used to continuously train their pilots on their fleet of aircraft, especially new equipment that is being added to replace aging craft and to accommodate their business growth.”

Located adjacent to Love Field Airport, the project consists of a six-story 425,000-square-foot office building and an attached 375,000-square-foot LEAD Center that will house the flight simulators, associated offices and ancillary areas. Other features will include a 1,950-space parking garage and a 400-foot-long elevated pedestrian safety bridge.

“We’re excited about this new facility on our corporate campus and proud to make this investment in our people and in the Dallas community,” said John Zuzu, Southwest Airlines.