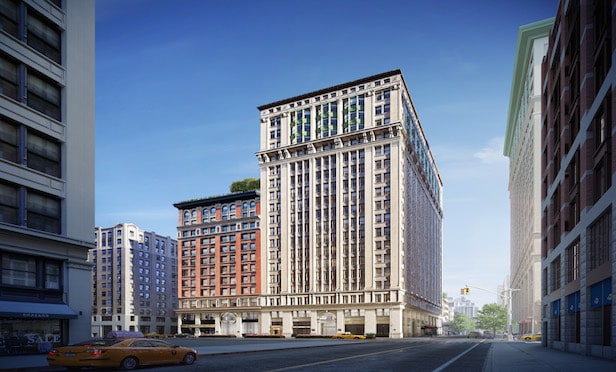 The deal, arranged by NKF Capital Markets, is structured as a 10-year fixed rate interest-only loan that replaces a $217-million loan from New York State Teachers’ Retirement System. According to NKF Capital, the financing allowed the building owner to recapture equity spent on a $135-million capital improvement program at the complex that was undertaken over the last 18 months.

The 675,000-square-foot, Class-A property that features two contiguous buildings is home to such tenants as Facebook, BuzzFeed, T. Rowe Price and STV Engineering. The property, built in 1909, is nearly 100% leased with the only vacancy being a new 580-square-foot space on Park Avenue South that connects to 8,000 square feet in the windowed lower level.

“I’ve spent the better part of three decades redeveloping and repositioning our two office buildings, and each transition has been remarkable; this one is the pinnacle. We are thrilled at what we’ve accomplished with the asset’s repositioning and ultimately its refinancing, and are extremely proud of our 225 team and our tenants,” says Orda Manaement chairman Morton F. Silver.

In response to the terrorist attacks on 9-11, the Port Authority of New York and New Jersey immediately needed a new space and a space was fitted out for the Port Authority at the top of 225-233 Park Ave. South. When the agency committed to moving to 4 World Trade Center in 2015, its relocation opened the door for a complete repositioning of the asset. The buildings now feature three stylized lobbies; a 13th-floor rooftop garden and adjacent glass pavilion; a 14th-floor garden terrace; a 19th-floor, 4,000-square-foot, glass-enclosed courtyard; new mechanical systems; new elevators; and a large loading dock.

225 Park Ave. South was acquired by the 225 Fourth Co. in 1954. The company was organized by Orda Management Corp., which has managed the property since then.